The latest survey of CBC Radio 2 market share - not so good, eh?

If you have been following the intermittent posts of this blog then you will know that we analyze the market share of CBC Radio 2 stations from time to time. We use the data provided by “Numeris” (formerly the Bureau of Broadcast Measurement, or “BBM”) to compare the audience share of CBC Radio 2 stations to 2007, just before the CBC embarked on their disastrous attempt to revamp the CBC Radio 2 programming. The BBM survey that measured the radio audience in various Canadian cities before the CBC made their changes to CBC Radio 2 was termed S1 2007; i.e. the first survey of 2007.

The latest survey available from Numeris is the survey spanning the period Sept. 1 2014 – November 30 2014. To be consistent with previous terminology from Numeris we call this survey S3 2014; i.e. the third survey for 2014. Note that these surveys use PPM data. “PPM” is an abbreviation for “Portable People Meter”. Ottawa and Winnipeg are not included in the S3 2014 survey since these cities are still surveyed using Radio Diary data.

So, onto the results. In spite of an increase in the total radio listening audience in Montreal by 4% since S1 2007, the audience share for CBC Radio 2 has declined by a whopping 42.1%. Not good.

In Calgary the total radio audience has declined 16.6%. The audience for CBC Radio 2 has dropped 49.5%.

In Edmonton the total radio audience has declined 13.3%. The audience for CBC Radio 2 has fallen 62.0%. 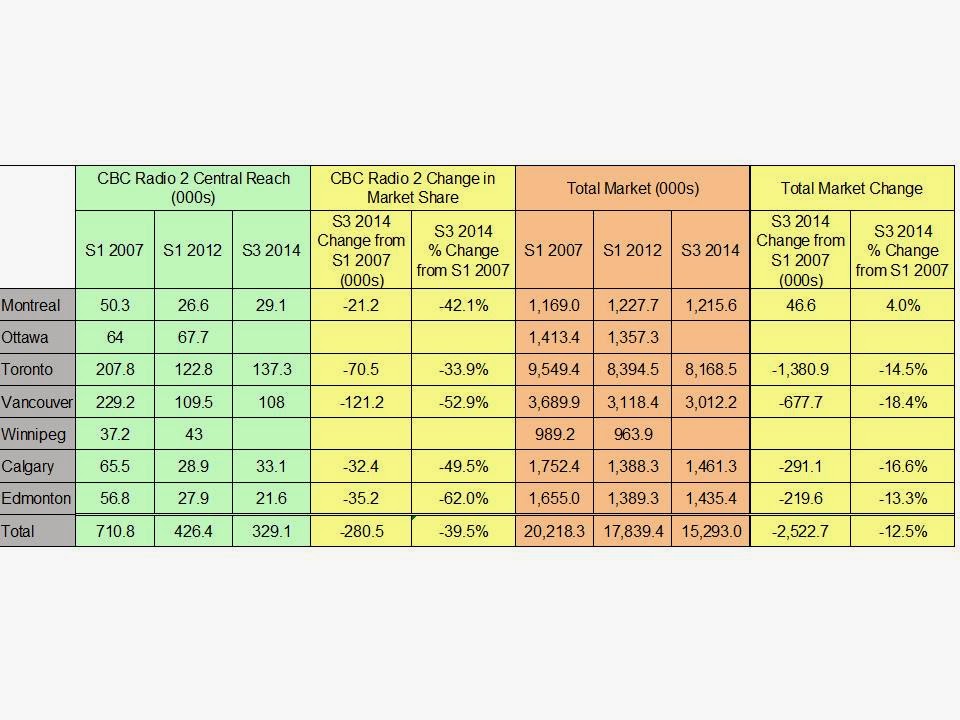 Commentary on Canadian Politics, U.S. Politics and Life in the Common Era

Tweets devoted to commentary on the rich display of absurdity that surrounds the residents of the nation's capital. Follow me @rantonstupidity. Occasional tweets on CBC Radio too!

"The Arts Report" with Joe Cummings axed from "Music and Company".

"The World at Six" news broadcast cut to a five minute summary of the day's news.

"Music for a While" and Danielle Charbonneau replaced by "Tonic".

"In Performance" replaced by "Canada Live".

"The Singer and the Song" cancelled.

Howard Dyck axed from Saturday Afternoon at the Opera.

"Here's to You" with Catherine Belyea cancelled.

My sources for the above chronology are my own memory, the Radio 2 web site and Colin Eatock's excellent article on the CBC Radio Two restructuring in the Summer 2008 copy of "Queen's Quarterly". I've undoubtedly missed some of the changes made to CBC Radio Two over the past two years, or have made an error in the timing of some of the changes. The fault of course is mine.

Media articles on the CBC

Remarks made by CBC executives

Other blogs about the CBC